Warning: this post is kind of a journey. You may want to get a drink before you sit down to read.


Several weeks ago now, we had an event at work called "Story Days," wherein all the story artists on campus attended lectures, pitched sequences from upcoming films, then drank too much and swore loudly at each other across the tables of a fancy restaurant.

It is my habit to avoid drinking and swearing, but I did enjoy the lectures very much. Guillermo Del Toro, Roger Deakins, and Dean DeBlois had some really insightful and inspiring things to say, so I'm really glad I got to attend.

Like most of you, probably, I doodle incessantly...especially when listening to people talk for long stretches. The following are what I thought to be fairly successful caricatures of 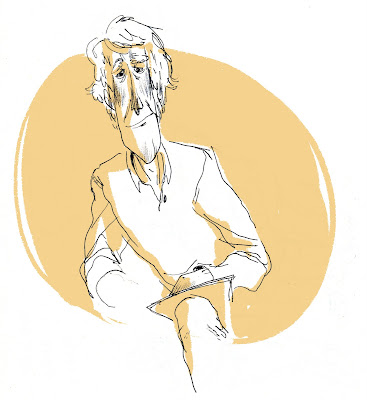 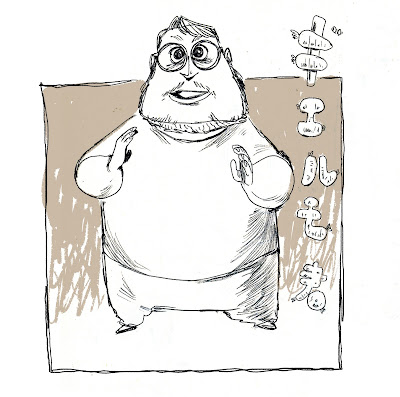 and Guillermo Del Toro, who on the day was wearing what appeared to be pajamas. The drawings themselves were quick and intuitive, made with a cheap Bic Round Stic ballpoint pen (tone added later by the inimitable Philip Craven).


Usually when a good doodle happens in my sketchbook, it is a complete accident (especially meeting doodles, since I'm thinking about what's being said and not thinking about the drawing...depending on how well the meeting is going).


These two rare successes were followed by my more comfortable friend and companion: ABJECT FAILURE...


No matter how I tried, for the life of me, I couldn't capture a likeness of Dean DeBlois. Below, you will find all of my failed attempts. The first bunch are in ballpoint, with the little guy in the middle on the bottom being the only attempt made during the lecture. After my initial failure, I turned to my trusty friend YouTube to provide me with some footage of Dean (I prefer video to still images when drawing people that I can't observe directly). More failure followed in both 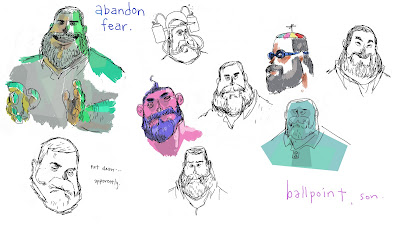 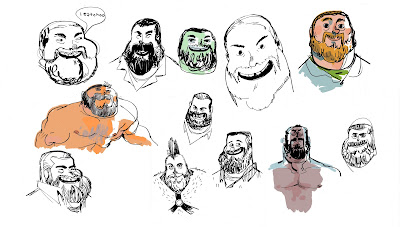 After a while (not so very long, really), I gave up and just started drawing Aquamans. Then, I couldn't stop drawing Aquamans during meetings for, like, a week after that. This has been known to happen to me from time to time. 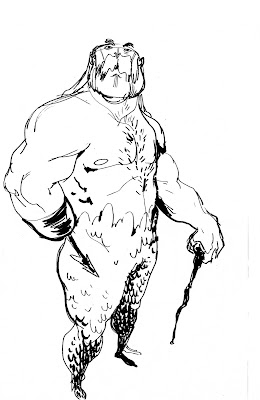 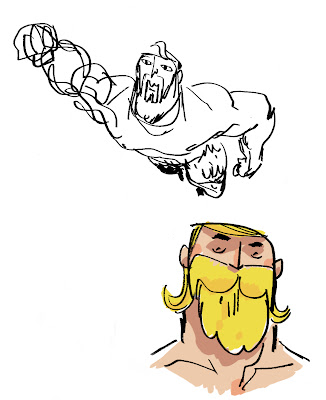 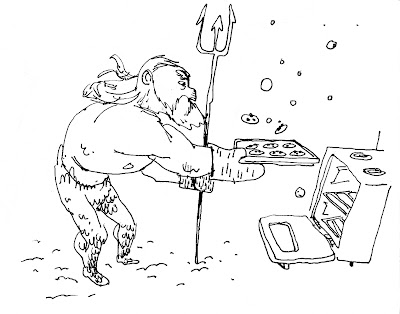 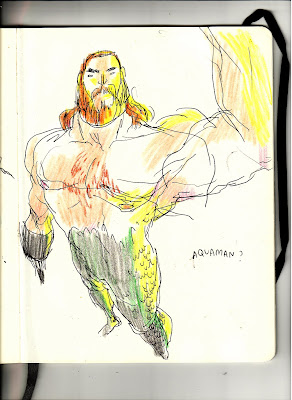 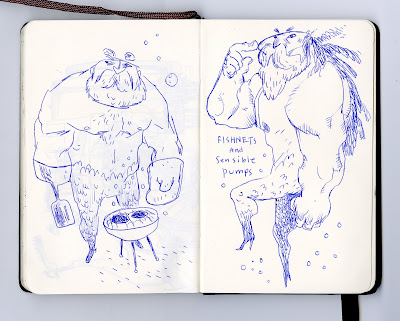 I realized that part of what sent me on this journey is a personal failing of mine: I'm impatient. As I mentioned previously, I find myself drawing in ink almost exclusively. For better or for worse, this means a lot of quick drawings that don't get fussed with. If I don't like the way something is going, I'll usually just start another drawing...or turn the current drawing into something irreversibly silly (this is a common fix for me).

I suppose I should wrap this all up with some kind of resolution. I don't want to be stuck in a rut, so I suppose I'll try my hand at some pencil drawing...I tried it out a few weeks ago, and met with mixed results. Let's see if there are things I can learn from getting a little fussy with drawings. See you on the other side of this experiement.
Posted by Anthony Holden at 5:47 PM 20 comments

My son writes the best dialogue.
Posted by Anthony Holden at 7:19 PM 10 comments 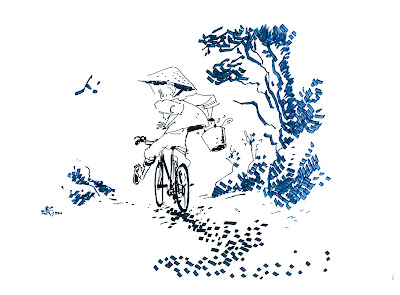 I don't know whether it's my impatience or what, but I draw almost exclusively with pens when I'm not working digitally (more on this later). Last night, while refilling a reservoir brush pen, I found some cartridges for my long-neglected Pilot Parallel Calligraphy pen. So, I pulled it out of retirement and was reminded of how much fun it is to draw with. I decided on this cool electric blue cartridge, and the first bit of the drawing shows darker because of the remnants of the previous navy cartridge that was in there from months ago.


Maybe I'll make some more drawings with it soon, instead of letting it sit around unused for several months in a row... :)
Posted by Anthony Holden at 5:40 PM 13 comments 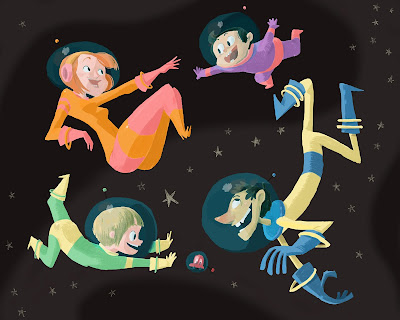 Happy Mother's Day to my dear wife, who requested this post.


Incidentally, I happen to have a few extra prints of this left over from the gift that I gave my wife, so if it wouldn't weird you out to have a picture of my family hanging up in your house, I can give away 8X10 prints to the first 3 people who want em.
Posted by Anthony Holden at 3:41 PM 22 comments 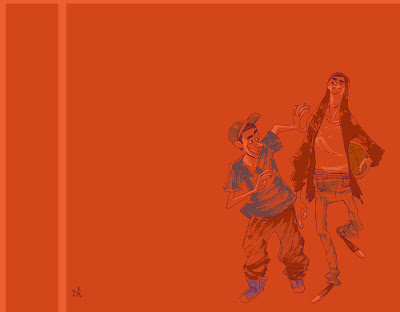 Saw these dudes crossing the street on my way home from work.

Man, I can't stay away from that orange, can I?
Posted by Anthony Holden at 4:30 PM 7 comments

Email ThisBlogThis!Share to TwitterShare to FacebookShare to Pinterest
Labels: ink brush, pen, photoshop
Newer Posts Older Posts Home
Subscribe to: Posts (Atom)
The Illustrious and Illustrative Sketch Adventure Lifestyle of Anthony Holden. Cartoons, Sketches, Character Designs, Storyboards, Comics, Illustration, Animation, Silly thoughts, Intermittent Posting, and Arbitrary Capitalization by American animation artist, Anthony Holden. Thanks for stopping by and taking a look!
All content on this page copyright 2007-2011 Anthony L. Holden. Do not use without permission, except for purposes of review.