When there's this much of it, I don't know what to title the post.
First, a new comic! 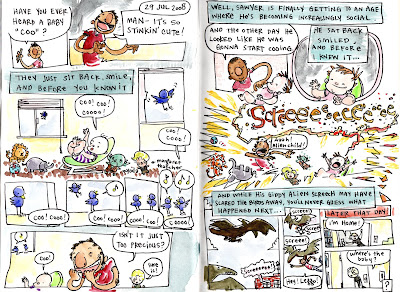 Then, approximately one million sketches.
These are from church and Cub scout day camp.

More sketches from church, in my fancy new Fabriano sketchbook with tone paper...even though I haven't gotten around to capitalizing on the coolness of the paper yet. I wanna do some washes with white highlights, but we'll see when I get to that. Here's the last stuff from the most recent sketchbook I killed. 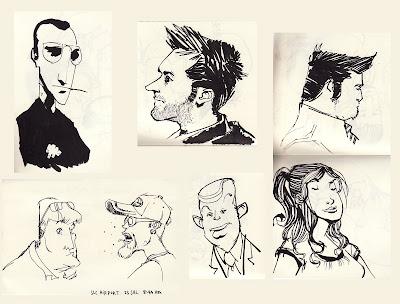 And some sketches from Comic-con and Sea World (which I had never been to before). We (not just I...since I was part of a larger group) got to meet basically all of my favorite artists from Disney and Pixar (except Enrico...but that'll have to wait till APE, I guess). Also among the comics/animation industry people we got to meet were Powerpuff Girls and Foster's creator, Craig McCracken and Understanding Comics' Scott McCloud--radical!! In additional news, our comic, Peep Show, was really well received by all the people we traded with (and, lucky you, it's still available for purchase in the sidebar of this very blog). Scott Morse and Paul Briggs even traded their totally rad sketchbooks! Thanks, you guys! 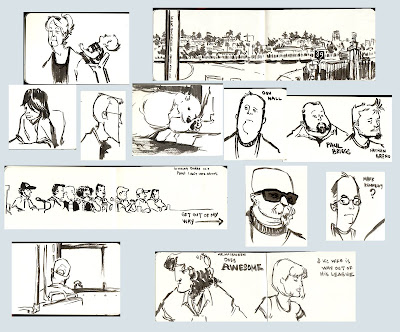 As if there weren't enough going on, Jake and I started playing an eye-spy sketching game. Basically, you pick a person out of the crowd and then make up a story about them. Here are some of the results of our game.

Then, while I was on the plane, I was pretty excited about the game so I played all by my lonesome--it was still pretty fun, though! 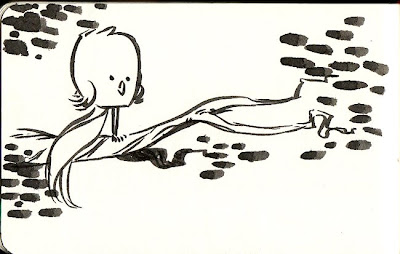 Of Baby Pirates and Zen Vegetarianism

So, I am leaving for Comic-Con in a little less than 4 hours (meaning that I'll get a little less than 3 hours of sleep). But I couldn't just leave you faithful readers with nothing to read while I was gone, so I've whipped up another couple of short comics. I'm actually thinking of putting some fun watercolor washes over these journal comics and then binding them nicely (perhaps hardcover?). Let me know if you'd be interested in purchasing such a creation. In the meantime, BABY PIRATES!! I'll be sure to sketch a bunch at Comic-Con, so I can document all of its weirdness.
See you next week!
(As a side note, if you order Peep Show off the sidebar to the right in the next couple of days, just be aware that I won't be shipping it until next Monday, 28 July 2008; sorry for the inconvenience!)
Posted by Anthony Holden at 2:03 AM 9 comments

So it's been a little while since I've updated, but not because I haven't been busy making more drawrings. I've been doing that, and I've been taking care of that cute baby and doing some freelance storyboarding at a couple of different places on a couple of different projects.
In other news, today is Allison's birthday! Hooray! We are just hanging out at home today, and her freshman year college roommate, Laurie, came to visit. Since it was Laurie's birthday a month and a half ago, we're just having a birthday bonanza.
Anyway, here are a couple of things I've been working on. I've been trying out gouache lately (with mixed results), and it's been a lot of fun.
Here's a snapshot of my little studio space in our apartment: 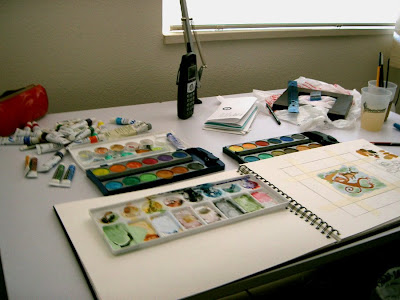 And here's Lauries cowboy, Big Tex (pre-framing). If I've learned anything from this experience it is this: if all else fails, fill in the background with giant cucumbers and call them cacti. 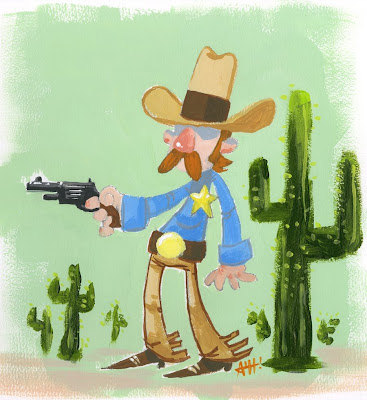 I painted this teeny thing for Allison, so she can think fondly of her little monkeys when she's at work and we're at home playing. It's a little smaller than 4.5" square.
I dunno why it's so fun to paint small but it is. 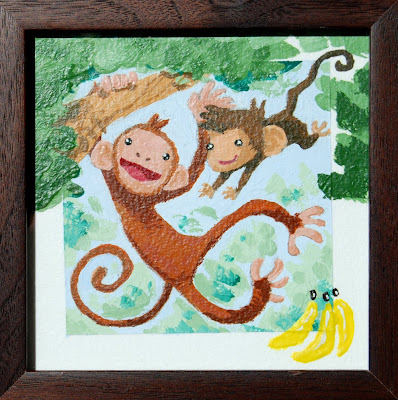 More sketches to come soon, when I get a sec away from work!
Posted by Anthony Holden at 5:32 PM 10 comments

So, as you may have heard from Jake, our book is officially finished!
It's at press right now (as you read--cool, huh?), and should be ready in under a week. We're pretty thrilled.
At the risk of being totally redundant, I will shamelessly promote our book here, too. It's called PEEP SHOW (not because of the cabaret scenes in the comics--of which there are none), but because it is a comic sampler, with two--count 'em--two comics!
We're taking the books to International Comic-Con in San Diego in a couple of weeks, where we're selling them out of our backpacks, since the con didn't want to give us a booth...which is actually lucky for us, because now we can wander about all we want! Hah ha hah haaa!
Anyhow, like Jake said, the books are gonna disappear quickly, so if you want to buy one email me (deliciouschocolatepudding@yahoo.com) or jake (jakeness@gmail.com) post haste, so we can reserve you a copy.
Without further ado...the cover(s):

We stole the idea from Enrico Casarosa and Ronnie Del Carmen, who printed a cool sketchbook like this, where there are two "front sides" (and no "backsides" to the book...which, come to think of it, is weird for a book called Peep Show).
Posted by Anthony Holden at 9:13 PM 12 comments 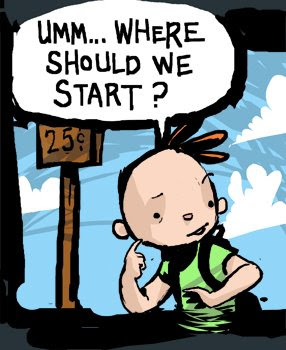 A little teaser image from my comic that will be ready in a week! (The actual comic is in black and white with a midtone...I just colored this for fun.)
Posted by Anthony Holden at 10:25 PM 3 comments

Email ThisBlogThis!Share to TwitterShare to FacebookShare to Pinterest
Labels: Comics, Reggie Washington
Newer Posts Older Posts Home
Subscribe to: Posts (Atom)
The Illustrious and Illustrative Sketch Adventure Lifestyle of Anthony Holden. Cartoons, Sketches, Character Designs, Storyboards, Comics, Illustration, Animation, Silly thoughts, Intermittent Posting, and Arbitrary Capitalization by American animation artist, Anthony Holden. Thanks for stopping by and taking a look!
All content on this page copyright 2007-2011 Anthony L. Holden. Do not use without permission, except for purposes of review.